Falafel is a deep-fried ball or patty made from ground chickpeas, fava beans or both. Falafel is a traditional Middle Eastern food, commonly served in a pita, which acts as a pocket or wrapped in a flatbread. The falafel balls are topped with salads, pickled vegetables, hot sauce and drizzled with tahini-based sauces.

Falafel is a common dish eaten throughout the Middle East and surely a well known street food. In Greece, our falafel dish is called “revithokeftedes” and is made almost with the same ingredients.

Falafel has become popular among vegetarians and vegans, as an alternative to meat-laden street foods. Its use has been expanded as more and more people have adopted it as a source of protein. 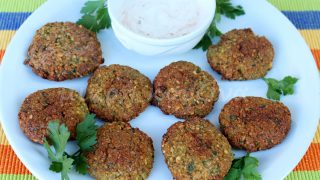 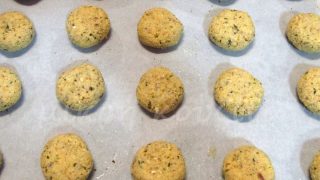 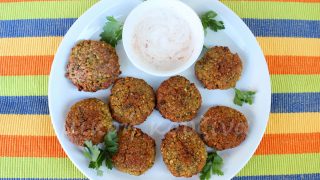 Put the chickpeas in a large bowl and add enough cold water to cover them. Let soak overnight, then drain.

Place the drained, uncooked chickpeas and the onions in the bowl of a food processor. Add the parsley, salt, garlic and cumin (you can also add the spices later in the mixing bowl). Process until blended but not pureed.

Put the chickpeas mixture in a mixing bowl and sprinkle in the baking powder and the flour. Add more flour if needed, so that the dough forms a small ball and no longer sticks to your hands.

Using your hands, scoop up some of the mixture and form it into a ball in your hand. Make sure that all your falafel balls are roughly the same size so they bake at the same rate.

Transfer the falafel balls to the baking sheet and gently press into patties 1 cm thick. If the patties break a little as you press them, just pat them back into shape.